Limit the choices. Restore your power!– Parenting tips from a Clown 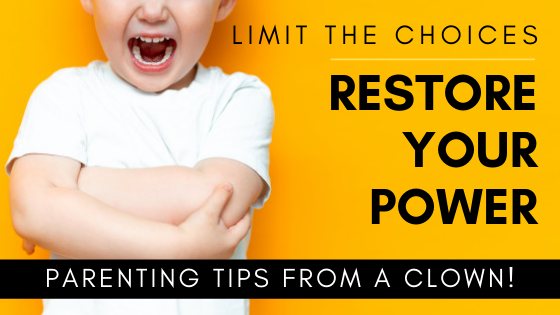 If this is your first time reading my blog, here is a quick introduction.

I have been entertaining and working with children for over 25 years. I have seen the best and worst that parenting has to offer. In prior posts, I have written about teaching children gratitude as well as getting your kids to listen . Today’s theme is about limiting your children’s choices.

I was hired as a face painter at a birthday party recently and had an experience which is the inspiration for this post! I have the unique perspective of getting one-on-one time with children as well as having a birds-eye view on the people around me at parties, picnics and carnivals.

Oliver is a sweet, precocious three-year-old. It is at this moment that I would like to remind ALL parents that a 3-year-old is simply a 2-year-old who has had a birthday. :o)

Oliver had never been painted before, and I have a routine for this age group, because I know them! I know what works, and I know how to make it a positive experience. It is my belief that toddlers do not intuitively want face painting, at least the first time. They don’t know what it is, so most of them are brought to me, because their PARENTS want it! And such it was with Oliver.

They had spent 5 minutes looking at my menu before it was Oliver’s turn. Mom kept repeating, “Do you want to be a tiger? Or a puppy dog? Or Spiderman?” Oliver was shaking his head at each choice. I intervened. “Is this his first time?” And it was. I said, “I specialize in toddlers and first-timers. Let me take it from here”. They said, “Oliver, do you want to sit in the chair” (He shook head). I said, “Mom, I’m going to have you sit down, and Oliver can sit on your lap.” She said, “Oliver, is it okay if Mommy sits in the chair?” He said, “No!”. I started to say, “It sounds like he doesn’t want to be face painted today.” Mom protested. “Oh he does. He’s just having a rough time. I’ll hold him.” UGH! Then Oliver said, “Daddy. Daddy!!!” Mom responded, “Do you want Daddy to hold you?” Oliver nodded, so she handed him to dad, and I invited dad to sit in the chair. Dad was just about to sit, when she said, “Do you want Daddy to sit in the chair?” Oliver yelled, “No, Mommy!”. So dad handed him back.

I suggested that dad stay in the chair, but let Oliver be held by mom. It is my practice for first-timers to paint something small on the parent’s arm, and then say, “Oliver’s turn”, and then paint the same thing on the child’s arm. This technique works 99% of the time. Dad was on board. But with every step, mom was asking Oliver for his approval, in essence, giving him choices that weren’t his to make! “Should Miss Lori paint on Daddy?” Oliver answered, “No!”

This led to an argument between the parents, in which dad stormed off in a huff.

Finally, I said, “Mom, would it be okay if I take over?” She nodded. I told her to sit down (with her son on her lap). She was about to ask for Oliver’s approval, and I shook my head and whispered, “don’t say a word”. Oliver was a little squirmy and started to say “no”. I said, “Oliver, it’s not your turn. It’s Mommy’s turn.” He said “No” again. (I have selective hearing in moments like this.) I sang while I talked to mom about her favorite color and then painted on her arm, ignoring him. Off the hook, Oliver was quiet and watched intently. To my song, I added, “And after mom’s turn, it’s Oliver’s turn.” A minute later, I was finished and reaching for the glitter, and Oliver put his arm out to me. (THIS is what normally happens, fyi!) Mom started giving him the full-face choices, and I could see bright, perky Oliver start to change again. I intervened with, “Oliver, do you want what mom has? Or do you want Elmo?” Remember that he never wanted this in the first place. He pointed to the flowers on his mom’s arm. So I began, and when mom said, “Are you sure you want this? Or do you want…” I stopped her and finished the design, and was rewarded with a boy who couldn’t stop looking at it and touching it.

Is this as painful for you to read as it is for me to write? As a face painter and balloon artist, I have witnessed interactions like these for years! And it doesn’t always end well. Some parents are still giving design choices, even when I am more than halfway through! (It is no fun to start over, when the child rubs out the design I have started, in favor of a better design!)

Here are the parenting lessons from my experience with Oliver’s family (and folks like them).

1. Stop giving your children so many choices. You aren’t helping them.

I know it feels good to believe that you are empowering your child, but young children are not inherently decisive. I believe that the stress of making the wrong decision is worse for the child (and the parent) than a child who gets something they don’t want and reacts. The subconscious belief is that it saves headaches and the child will grow up and be an independent decision-maker, right? Wrong!

I am certain that Oliver’s mom is a good mom who only wants the best for her child. What she doesn’t know is that while trying to make him happy with every decision, she is actually creating discontent, by allowing him to micro-examine every decision, even those already made. What she was looking for was agreement, proof that this was okay, but it undermined her parenting power each time.

3. Trust in your own authority!

You are the parent. You are in charge! But so many moms and dads are afraid of making the “wrong” decision for their child, which could lead to the mother-of-all-tantrums! This leads to the faulty belief that if they let their children make all the decisions, it will avoid tantrums.

4. Letting your child make too many decisions gives them a skewed perspective of the world!

The recent trend in parenting where children aren’t told “no” or allowed to feel any discomfort (because we don’t want to damage their self-esteem) is not building resilience in children. They don’t learn how to deal with disappointment. They don’t learn to be content with what they have. Instead, it creates an entitled child who becomes a victim to every circumstance in life which doesn’t go their way. Remember “You git what you git and you don’t throw a fit”? Most children know the saying, but few are held to its standard!

5. Your child doesn’t actually want the burden of making all of the decisions.

Have you heard of “FOMO”? (Fear of missing out). For some children, the fear of making the wrong decision is worse than having no say at all. Train your child to have faith in your decisions, and let them make age-appropriate decisions as they grow. And just a few. The sooner you let your child believe they are in charge, the harder it will be for you (and them) when they discover that they aren’t.

It’s important to keep the big picture in mind! Making the hard choices now will pay off in the future, I promise. If you’re giving your children choices to avoid conflict, consider this. The meltdown of a young child is far easier to deal with than the teen equivalent. Seriously! Have you ever seen a teen tantrum? Be the alpha male/female in your home now, and it will pay dividends later!

Hang in there, mom & dad! Keep your power. 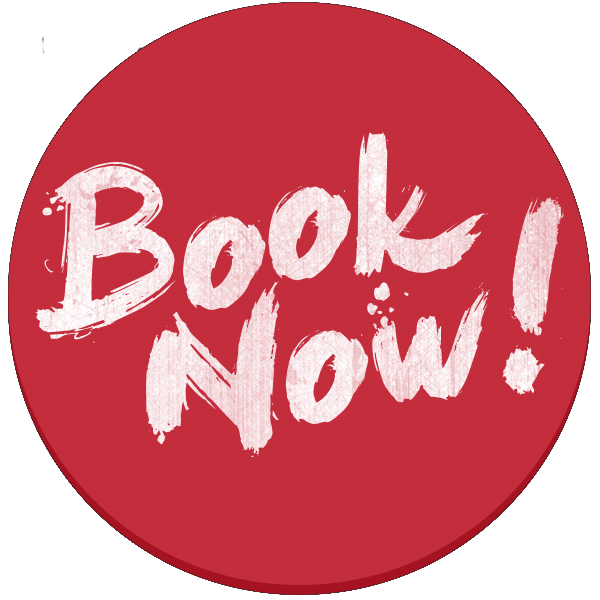