When was the last time you laughed really hard? It’s time to laugh that way again. 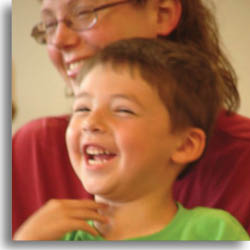 For over 20 years, A Touch of Magic has specialized in physical comedy, age-appropriate humor, and uproarious audience participation! Think all “kiddie shows” are hokey? Think AGAIN! We are a refreshing alternative to traditional children’s entertainment. Plus, we know children! We know that what it takes to entertain a 3 year old is dramatically different than a 10 year old. We don’t believe that “one size fits all” when it comes to entertaining children, because they are developmentally different, so our shows are designed to reflect those differences and that’s why they are so very popular! (Of course, all of our shows are appropriate for families, so even when they are “designed” for children, intergenerational audiences will enjoy them!)

When you bring our award-winning shows to your special event…

Hear what our clients have to say about our Comedy Shows!

Here’s a sampling of our most popular shows: 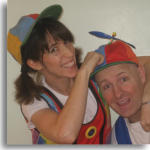 Mixed Nuts! *If you like the idea of Half Pint & Oscar, but you aren’t sure about clowns and your young audience, ask us about “Mixed Nuts”! Same entertainers…same silliness…same exact show…different look! 30 or 45 minute shows available 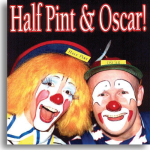 Hilarious Hijinks with Half Pint and Oscar What is everyone laughing about? It’s the Midwest’s favorite Kid’s Comedy Clown duo, Half Pint and Oscar. Join us for physical comedy, age-appropriate humor and uproarious audience participation! Half Pint and Oscar have tickled funny bones throughout the region with their special blend of hilarious hijinks, guaranteed to produce side-splitting laughter in ages 4-94!! 30 or 45 minute shows available 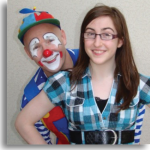 Oscar’s BIG Break When this young pianist makes the big piano concert debut, our old friend Oscar decides to help! With a delightful blend of music, silliness and physical comedy, you’ll find yourself giggling as these two compete for the stage, for the laughs and for your heart. 35 minute show, designed for ages 4-10 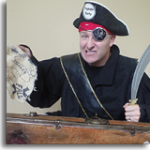 Treasure Beyond Measure When the greedy Capt’n Curley inherits his father’s pirate ship, he seeks to locate the world’s greatest treasure! Join this silly pirate as he recruits rookie pirates and embarks on an adventure filled with physical comedy, uproarious audience participation and an insight into the greatest treasure of all! 30 minute show, designed for ages 4-9 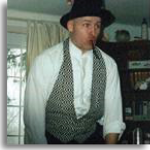 The Magic Extravaganza What do you get when you combine a trunk full of silly props, a dynamic performer and an enthusiastic audience? You get our popular parody on a magic show! This single performer show (featuring Mark or Lori) will have your group in stitches when the kids can do the magic, and we can’t! 35-45 minutes, designed for ages 5-7

nchkins We developed this comedy magic show for little nippers, because we understand that what makes magic “magic”, is the intrigue… the “how did you do that?”. We know that children are developmentally different, and ages 3-5 don’t care if the Ace of Spades became an Ace of Hearts! This show introduces magic in a funny way and sparks their interest in magic, at a level that was designed for THEM! This single performer show (featuring Mark or Lori) will keep them giggling from beginning to end, and leave them feeling very magical! 30-35 minutes, designed for ages 3-5 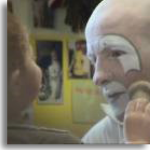 Behind the Red Nose When you invite a daddy, the colors of the rainbow and a silly sense of humor to your young group, you get one of the Twin Cities’ favorite clowns! In this interactive and funny makeup demonstration, youngsters will be enchanted and amused at the magical transformation between human and clown! This show is ideal for audiences of fewer than 60 people. This is also especially popular for younger audiences which have ever been scared or intimidated by clowns and other animated characters. 30 minute show, designed for ages 18 mo. to 5 years 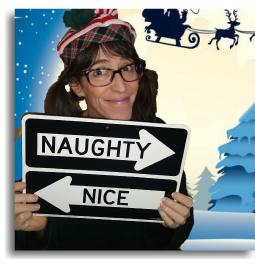 Selfish Elfish It’s the time of the holiday season when girls and boys all over the world are thinking about the choices they’ve made this year… But what happens when one of Santa’s own helpers doesn’t make the “nice” list??? It might take a miracle, or maybe just a little holiday magic… 30-35 minute show (Available in November and December), designed for ages 3-10

Join in & have fun with A Touch of Magic’s Comedy Shows!