Getting your kids to listen. Why YOU Have to Be the Boss! – Parenting Tips from a Clown 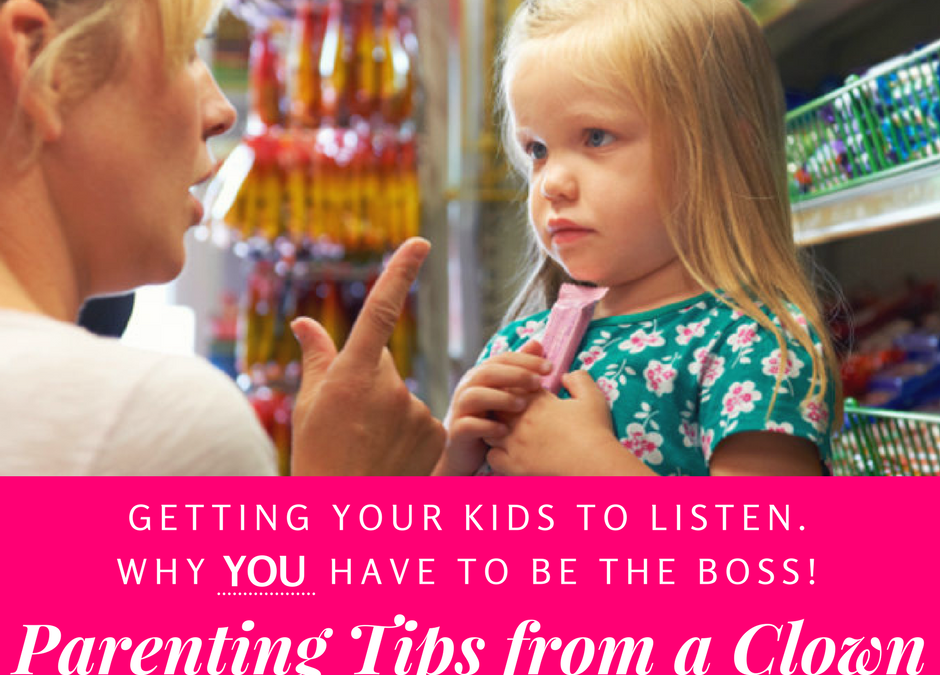 Parenting Tips from a Clown: based on 25+ years of entertaining & educating kids 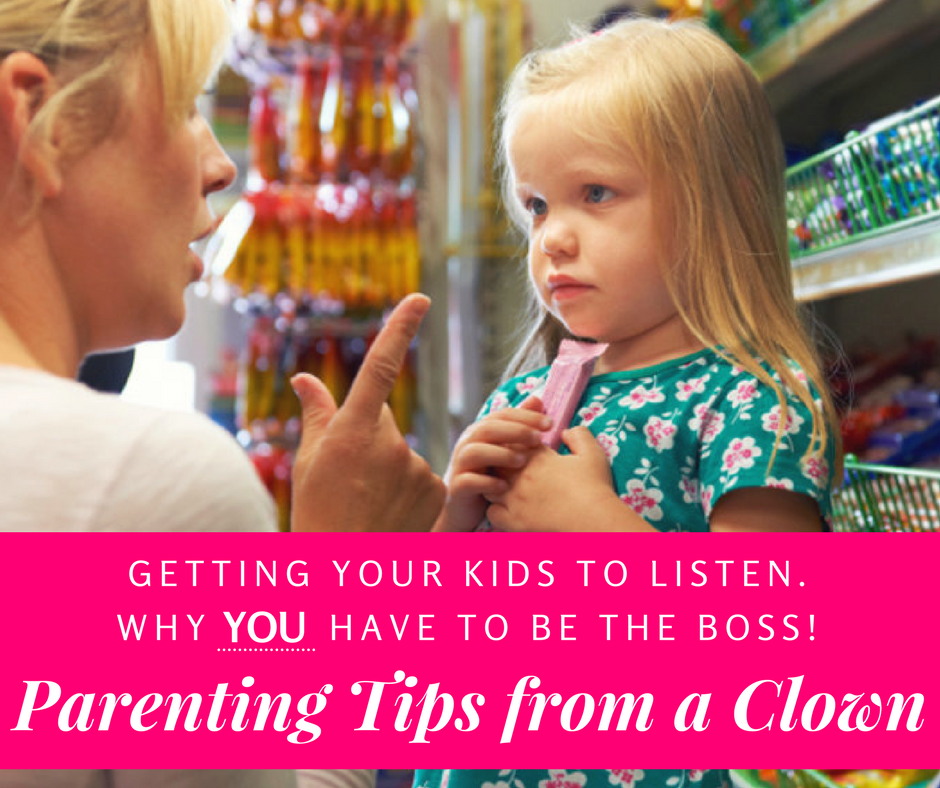 I have been working with children for 30 years, and parenting for 22 of those years.

Recently, someone asked my opinion on a controversial parenting video, related to obedience.

Since my career has impacted my parenting, I decided it was time to post another “Parenting Tips from a Clown”. (For my last tip, on Gratitude, click here.)

A dad from a birthday party emailed me saying, “the kids were running around, out of control, and then you arrived, and magically they sat down and paid attention.” It wasn’t magic. It was taking charge in such a way that everyone could have a good time, and I could accomplish what I was hired to do.

My husband and I worked with children (with and without special needs) for years before we had our own. We were trained that “You never lose power… you only give it away”, and that for a child to feel safe and secure, he needs to know that the person in charge really is in charge. My children are now 22, 19 and 16, and I parent the same way I run a classroom, birthday party or company picnic.

How do I get my kids (and yours) to listen?

My kids have always been obedient, mostly. 🙂 The biggest pitfall I see with today’s parents is that they get drawn into long arguments and explanations, (while the child is successfully avoiding the very thing being discussed, and the parent is getting worn down). Moms and dads are so busy trying to build self esteem and make sure their child is never uncomfortable, that they are taking responsibility for their children’s happiness. No, your 2 year old does not need (and often won’t benefit from) an explanation. Your 7 year old might, and I’m all for it. But if you’re in the business of trying to explain things to your kid, in order to convince them to be obedient, you’re sending a message that they really have a vote! On top of that, parents who over-explain, in order to get “buy-in” actually create children who feel entitled to an explanation before complying. (2 year olds don’t intuitively demand that until they are trained to do so.) And if the explanation isn’t a good one, then the parent has to convince the child to be obedient. It has been proven that reasoning with a child under the age of 8 does not improve behavior. Bottom line…Your explanations are weakening you!

You have it in you to take back your power! When your child runs into the street, no parent croons, “Honey, let’s not do that. If a car comes, it could hit you, and then we’d have to take you to the hospital.” You say authoritatively, “STOP!” Your child doesn’t question you. (And you don’t question yourself.)

It’s not about volume or urgency. Getting children to listen is about focusing on the “what”, not the “why”.

An “Okay” Experiment! Why you HAVE to be the Boss.

We’re so afraid of damaging our children (or we’re afraid of looking like we’re harsh parents to our peers), that we subconsciously tiptoe around our kids. Don’t believe me? Here’s an experiment… Start paying attention to the parents around you, and watch how many of them give instructions, and then follow it up with “Okay???”. This is one of my biggest parenting pet peeves. I hear it daily, and I see what it does. Parents think they are being firm and assertive, but then they undermine their own authority.

Asking “okay”, while making you feel like you’re a much nicer parent than the dictator who raised you, actually dis-empowers you, because it is, in fact, a request for approval. If you say “okay?”, you are inviting a response. And over and over again, I see kids fight back, because sometimes the answer to “Okay??” is “NO!”. And it’s the adult’s fault for suggesting that the child had a choice in the matter.

At a recent event, I was twisting balloons, and a 5 year old boy punched his mom, and her response was, “Don’t hit mommy… okay????” And he “answered” her question by hitting her again.

I was painting faces at a company picnic the other day, and we had a specific board with simple designs, in order to reach a larger number of children. Everyone in line had ample time to study the designs and know what they wanted before getting in the chair. A four year old boy climbed in the chair, and I handed him the sheet and said “point to the picture you want”. He turned away with a harrumph. His mom, embarrassed, covered and said, “He’s Shy!” (Another pet peeve of mine, but I digress.) “No problem”, I said, and I asked the question again. He didn’t answer. She said, “He wants a dump truck”, a design which is NOT on the board. I said, “Sorry, bud. We don’t have any dump trucks today. But I can do a Batman, spider, snake or something else on the board.” Mom said to him, “See? You can’t have a dump truck, OKAY???? Don’t be upset, okay? We have to pick from these pictures, okay???” And now this boy is in full-throttle melt-down, because to each “Okay?” he has said “NO!” and so it appears that she is not listening to him.

In her efforts to be “nice”, she was actually disregarding him. And she said to me, “Can’t you PLEEEEEEAAAAAASE paint a dump truck??” This is a child with too much power. (Oh, and yes. I did paint the dump truck. I gave up trying to train parents years ago, and not painting the truck was taking more time than we were saving by not having it on the board. The boy won.)

By contrast, I was just at a large birthday party, and a boy said, “I want Spiderman” (which was on the board). His dad said, “No. We’re not getting that today. You can have this, this or this.” (pointing to other pictures). The boy started to fuss, and Dad calmly said, “Your choices are this, this or this, or you won’t be getting face painting today.” (He did not end with “okay???”) And the boy chose from the selections and was thrilled!
Example 3 shows a parent who understands what it is to be in charge, whose child was ultimately happier than the boy who won and got the dump truck. (Dump truck boy was in melt down only 10 minutes later when the chocolate chip cookies were gone, leaving only oatmeal raisin. Mom had the picnic committee digging through the kitchen for just one more chocolate chip cookie.) See a trend here? And let me say, this is a good, loving mom! She just doesn’t understand how much happier he (and she) would be in the long run if she exerted her authority in the now.

Please know that my own children are not being raised by authoritarians. I honor my children’s opinions, in the appropriate time and place. Children whose parents understand and execute their authority reasonably will ultimately raise children to have confidence in their parents’ wisdom and experience, because the parents have confidence in themselves. How I know these principles are effective and haven’t broken or damaged my children is that they are now working with children, and my kids often echo what they have intuitively learned. After spending hours twisting balloons at a company picnic (and watching the best & worst that parenting has to offer), my 16 year old (without any teacher or parenting training) came home and expressed shock at how many parents act like their kids are in charge and are afraid of what will happen if they say no.

When my oldest child was 8 years old, I was working on a parenting manual for a workshop (based on my experience working with children with special needs and others). She asked if she could write a chapter.  The title of the page was “What your child hopes you never learn”. And she wrote a three paragraph essay about how children don’t really want everything they ask for. In her 8 year old voice, she even said that it makes children feel loved when their parents are firm and say no. I promise that we didn’t tell her to think or say that. She just knew.

None of what I have written suggests that we have been perfect in any way. We’ve made mistakes along the way. But the one thing I’ve done well is remembering that it’s okay to be in charge; it’s okay for my children to be unhappy with my decisions; it’s okay to give instruction without explanation; it’s okay to say no, without apology. (And it’s okay to apologize later if my earlier decision was wrong. I’m still a good parent, and so are you, even if we goof.)
Comment below and let me know how your experiments go… okay??? :o)
[ez_btn color=”blue” url=”https://atouchofmagicentertainment.com/contact”]Book Today![/ez_btn]