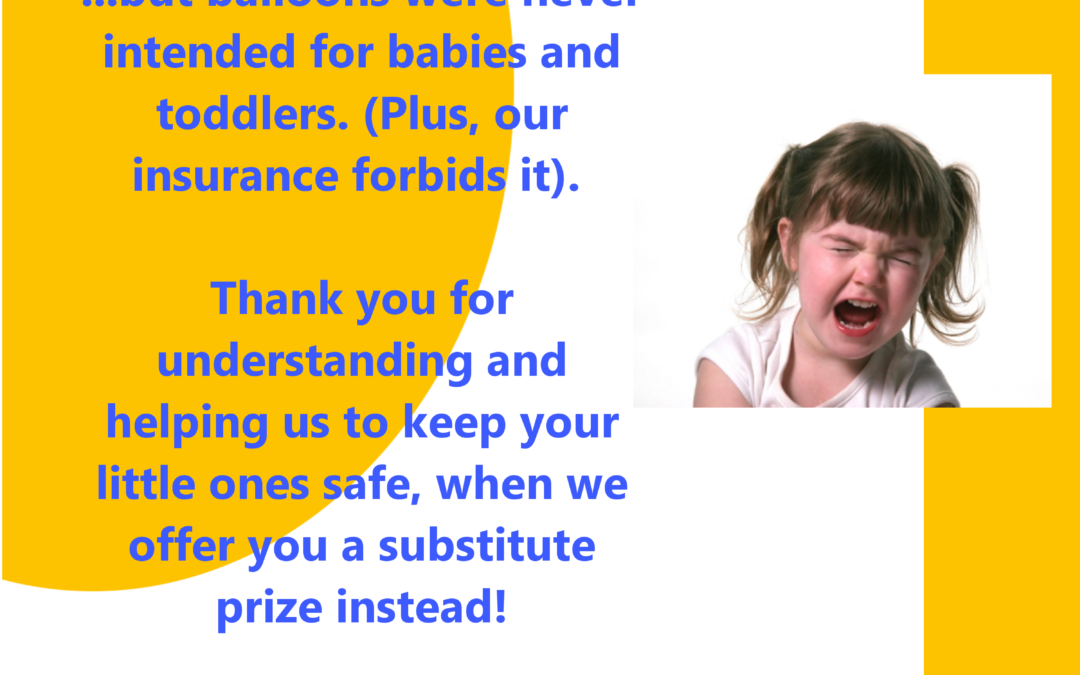 The world agrees that we shouldn’t give choking hazards to babies and toddlers.

We’ve all seen the “toilet paper tube test”: if an item fits in a toilet paper tube, it’s a choking hazard, and conscientious parents everywhere “baby proof” their homes and protect their children vigilantly…

…until they meet a balloon artist! And then some parents believe their toddlers to be invincible and discerning! 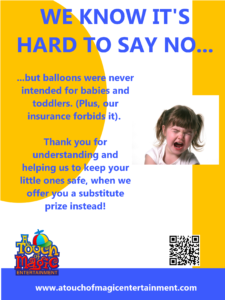 Balloons were never intended for babies and toddlers!

We also make announcements regularly,that we have substitute prizes for babies and toddlers, as we see parents with toddlers in strollers joining the balloon line. But still they seem to believe that they are exempt. It is true that an inflated balloon would past the tube test, however, balloons pop, and the shrapnel is not only small, it’s hard to remove once the child has inhaled it.

From an article in the New York Times by Claire Collins:

Latex is dangerous because it is smooth and will conform to the trachea, blocking the airway and making it almost impossible to expel with the Heimlich maneuver. In fact, using the Heimlich maneuver when some air is getting through could make the situation worse by moving the balloon to completely obstruct the throat, said Dr. Marty R. Eichelberger, the director of trauma services at Children’s National Medical Center in Washington. Likewise, unless the balloon can be seen and grasped completely, attempting to remove it by hand could easily push it farther into the trachea.

Recently, I was twisting balloons at an event, and here is how the dialogue went between a mother and me, when the family made it to the front of the line:

Me: Hi there! I don’t know if you heard my announcements, but we aren’t able to give balloons to babies and toddlers, and  so she isn’t old enough.

Mother: Yes, she is.

Me: Well, she’s a toddler, and the legal age for balloons is three, so I have a substitute prize for her, something I promise will never pop, so there’s no tears and no choking.

Mother: But if she doesn’t get one, she’ll cry.

Mother: Can’t you just give it to me? Shouldn’t I be the one to decide what I can and can’t give to my kids? I take full responsibility, and I won’t sue you if something happens.

Me: No. I’m sorry. I wish I could, Our insurance allows us to give them to age 3 and older only,  but here is the substitute prize.  (And I pulled out a non-choking-hazard brightly colored plastic animal toy)

And then, as we do with all toddlers, I made a big deal about pretending to blow it up and twist it (with squeaking noises and all), so it had the production value of the balloon sculpture, minus the risk.  I handed it to her daughter, and she was thrilled!  Then she stuck it right in her mouth.

Me: Wow. I am so glad that wasn’t a balloon.

Mother: She would NEVER put a balloon in her mouth. She knows better!

And then the mother stormed away in a huff, while the rest of the people looked at me sympathetically.

Now, it’s possible that her child might be the next Einstein. And maybe her child can also tell the difference between a gallon of milk and a gallon of bleach. Sure, I could have handed the balloon to her, knowing her intent was to give it to her daughter, feeling absolved of any liability. But as a professional in the events industry, my goal is not only to prevent being sued, but to keep our patrons safe. Some two year olds would probably be fine with balloons, and some five year olds probably aren’t. My job isn’t to decide which is which. I follow the guidelines of my insurance company, and then watch children throughout the event.

Most parents are understanding of the rule about no choking hazards for babies and toddlers. Many folks thank me for taking a stand (particularly nurses and doctors who’ve seen, firsthand, the impact of choking and youngsters). It isn’t easy, as I’ve discovered that some toddler parents throw tantrums worse than their children do! :o)

My husband and I have three children of our own, and we didn’t let them touch balloons as toddlers, even though we were also sure that they were gifted and exceptional in every way. Yes, it’s hard to say no (and sometime I’ll blog about toddlers and “no”, as it relates to my business. I’ve learned a LOT!)

Whether you’re a parent or a professional event planner putting together an event, keep in mind that when there is an inconsolable toddler whose balloon has popped, or the extreme case of toddler who can’t breathe, those conditions are far worse than the toddlers who have been told “no”. (And hopefully, this isn’t the first time they are hearing that word.)

If you’d like to read more about this subject: