Kids and Clowns: Is your child scared of clowns? 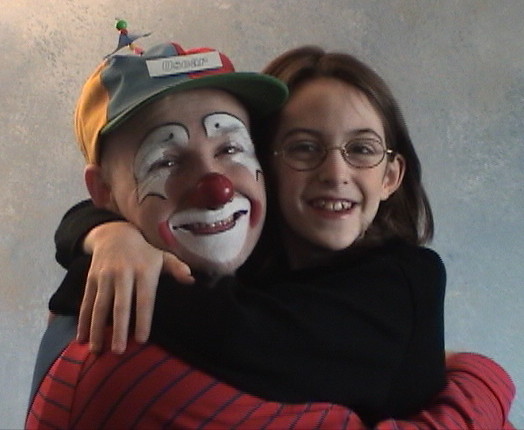 True or False…”Clowns are Scary”.

Chances are you answered the question through your own bias for or against clowns. But the general answer is FALSE.

I’ve heard this statement for years, and I decided to write about it after an event I had recently, where I was hired as a clown to entertain a group of 1-2 year old toddlers.  A recipe for disaster, right?  WRONG!

I entered the classroom and immediately sat down on the floor. I smiled and waved, but I kept my distance. One at a time, the children cautiously approached. (One child ran right towards me with open arms and sat down in my lap. I later learned that this surprised EVERYONE). 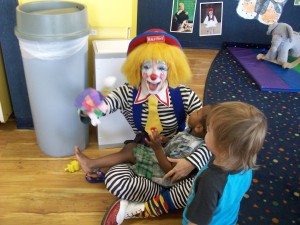 Sixteen toddlers (most seeing a clown for the first time), and not a single fearful child.

When I went into the preschool room with 26+ youngsters, there were two who were afraid in the beginning, but not in the end.

As a generality, most children are not intuitively afraid of clowns. How a child first experiences any animated character (Clown, Santa, Easter Bunny, Barney, Chuck E Cheese…) can, however, impact how all animated characters are perceived in the future.

Long before I became a Professional Circus Clown with the Ringling Bros. and Barnum & Bailey Circus, I was the mascot clown for a local miniature golf course, and they had me wear their trademarked clown face:  Large black diamonds over my eyes, an orange face, and a broad white greasepaint smile, all shiny. ICK!!  I was pretty creepy looking! I made Gene Simmons from KISS look like a happy teddy bear! 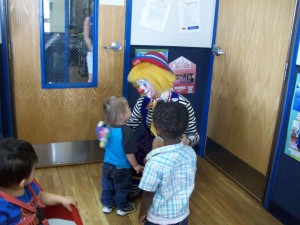 So what’s the truth about clowns and fear?

Here is what my experience has taught me over the years.

Kids and Clowns: Is your child scared of clowns?

Many children are naturally and appropriately hesitant around strangers, particularly in new situations.  Clowns are like cartoon characters come to life. Imagine, if you will, that you’re a young child. You love pictures of clowns from your books and videos, and suddenly, there is one standing over you, larger than life! That might be a bit intimidating.

Coulrophobia (the fear of clowns) is real. But for most youngsters, what appears to be fear of clowns is actually just uncertainty about the circumstances (and strangers) in general, and how a parent or teacher handles the situation will determine how long the hesitancy lasts.

Here are six things you can do to help your child deal with animated characters: 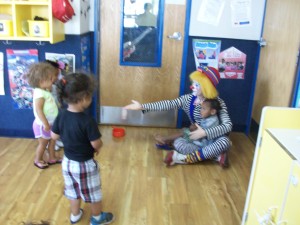 2. Be positive! Children take their cues from you. If you’re afraid your child will be afraid, she’ll pick up on it. I’ve heard parents say, “Watch out. There’s a clown, and you’re scared of clowns!” Please don’t do this!!! Instead, read on…

3. If your child is hesitant, honor his impulse without adding to the problem. As parents, we are proud of our kids when they display positive characteristics. I have also seen parents who are embarrassed when their children don’t behave as expected, particularly around people like me. Parents say things like, “are you shy today?”, because it allows them to save face, but it doesn’t help the child. Diagnosing your child with the “shy” label at a young age is not the best way to handle this. Even if it gets him off the hook for the moment, Children aren’t proud of being called “shy”, and it’s not your child’s fault that he is uncertain around the clown.

Imagine the difference for the child whose parent says, “You’re not sure about this nice clown, are you? That’s okay. We’ll try again when you’re feeling better about it.”  This establishes that the parent honors the child’s judgment (while also acknowledging that Mommy thinks the clown is okay). The child might change his mind. But if he’s “shy”, his opinion doesn’t count, because it’s never heard!

I have learned that if you give a child permission to be scared, it actually gives him the freedom not to be. Once I spot a child’s uncertainty, I help him gain control of the situation. I learn his name and I say things like, “Johnny, it’s okay if you don’t want to come near me. I promise I won’t come near you either, unless you want me to. Would that be okay with you, if I stay far, far away?” And Johnny always vigorously nods his head. He’s been given control. His situation is no longer uncertain.  Over and over again, children like Johnny approach me or let me approach them within about 10 minutes of this dialogue. The “shy” children who are whisked away never have the chance, and then they are reminded from that moment on, that they are afraid of clowns. 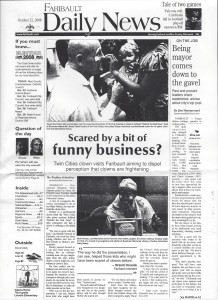 4. Avoid media and literature with scary clown figures! Okay. This isn’t for your  youngster. This is for YOU! I have encountered so many adults who are terrified of clowns, thanks to Stephen King’s movie IT! In fact, I meet more teens and adults who are scared of clowns than children. Even people who have known us in and out of makeup for years, once they watch this movie, can no longer be around us without breaking a sweat. It causes a very real Coulrophobia! But let’s say you let your child watch the Batman movie with the scary Joker, just don’t call the Joker a clown, okay? :o) 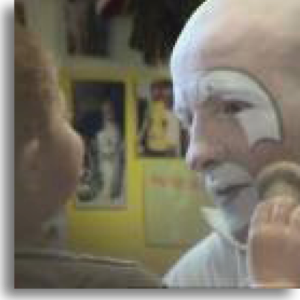 5. If your child has had a scary experience around animated characters already, you can use your power of influence to affect the future.  (This technique is particularly effective for age 5 & older). If your preschool aged or older child is acting scared, remember that she has language (and she probably didn’t when she was first made afraid…). Again, honor her feelings (without initiating the S-word).

First, don’t assume that just because she was afraid before, she’ll still be afraid. Ask her questions… “What do think of that clown?” If she says she’s scared, you can say, “I understand. When you were little, you weren’t sure about clowns, and that was a little scary. But now you’re bigger. And this looks like a really nice clown. Let me know when you’re ready to try again.”  No child wants to be afraid of that thing that everyone is supposed to love. Giving her permission to try again leaves that door open, without any guilt, shame or embarrassment. Also, allow the character (Clown, Barney, Santa, etc…) to interact with YOU, so your child can see that it really is okay.

6. Invite us to perform “Behind the Red Nose” for your little ones. This interactive comedy show (including a brief makeup-demonstration) allows the children to watch and help the transformation from mommy (or daddy) to clown. Over & over again, preschool and daycare directors tell us that our programs help children diffuse their fears:

The teachers in the toddler classroom I spoke about earlier handled their toddlers brilliantly. When the youngsters held back, they didn’t reinforce the uncertainty, nor did they force them to approach. And when the teachers spoke of me, they used words like “nice clown”, and “silly clown” and “funny clown”. When it was time to say goodbye, I was hugged by several of them!

It is my hope that your next experience with any animated character will be a positive one!

Thanks for reading (and sharing)! :o)

You can also schedule a call by following this link to our calendar! We’d love to talk to you about your next event (even if you aren’t looking for a clown)! We feature the Twin Cities’ best Face Painting, Balloons and Comedy Shows for kids! Check out our reviews, and follow us on social media @atouchofmagicmn.